Misa Toudou (, Toudou Misa) is one of the main characters of the SHIROBAKO anime series.

Misa has very short, straight black hair. A little piece of her hair is pointing up. She also has big light purple eyes.

Misa usually wears a white shirt with orange stripes and buttons on top. Over that she wears a black hoodie that has some orange and white stripes on it. She also wears quite short and dark-colored jeans, with black shoes. Misa has a tom-boy style.

Misa has an honest personality and is naturally cheerful and energetic. At times she struggles with confidence and how to reach her goals but usually manages to stay driven.

Misa made a film with Aoi Miyamori and the rest of the gang in the club: "Kaminoyama High School animation club" in high school, and she was inspired to work in animation because of Ema Yasuhara's drawings. She initially struggled with working in either 2D and 3D animation, but she now works at the CG production studio Super Media Creation.

After months, Misa was dissatisfied with her work at Super Media Creation since she can only draw tires. Hearing that she will draw tires months after months, even years after years, she considered leaving the job because she wants to draw something with stories. After talking with others, and watching the Zoo Park Story, she finally decided to leave Super Media Creation. She later enters Studio Kananbun by Aoi's introduction. 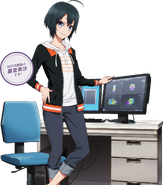