Rinko Ogasawara (小笠原 綸子, Ogasawara Rinko) is one of the supporting characters in the SHIROBAKO anime series. Rinko works at Musashino Animation as a star key animator, character designer, and the general animation supervisor of Exodus!.

Rinko is a beautiful pale-skinned girl with back-length curly light blonde (almost white) hair that has tight curls at the end with bangs hanging over the left side, deep red eyes and she is often seen with her black hairband bow on the top of her head.

She always wears goth Lolita clothing with a deep blue dress that has lighter blue frills and a white undershirt, a ribbon on the collar and buttons along her chest where the bottom of her undershirt's sleeves have small black ribbons.

Rinko behaves as a very elegant girl who doesn't talk much.

When Rinko was offered to do character design for a video game adaptation, she received harsh criticism and her designs were rejected several times. Tired and hurt, she realized that she could not keep saying “yes” to everything that was asked to her and decided to start wearing Gothic Lolita clothes, like the character she was trying to design at that time, in order to protect herself and become stronger:

An important thing I have learned is that I can't always say yes: Every creator has a sensitive heart. ~ Episode 16 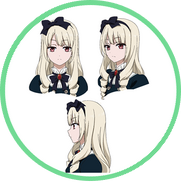