Tarou Takanashi (高梨 太郎 Takanashi Tarō) is one of the supporting characters of the SHIROBAKO anime series. Tarou is working as a Production Assistant at Musashino Animation in anime timeline.

In movie timeline, to accepts a staging offer after the incident, Taro quits from Musani but later accepts to be SIVA's staging.

Tarou is a young man of average height. Tarō has short spiky blonde hair, with the sides shaved. He always wears a black T-shirt, bracelets, blue jeans, and shoes.

Whoever comes here, will do better than Tarou.

~ Hironori Madoka in Episode 11, when commenting on the job interview.

Tarou has shown to be bumbling, air-headed, annoying and tactless. Tarō is also very childish but he sometimes knows when to take his work seriously. Tarō can be kind and generous, but it is his childish side that usually takes over. He thinks greatly of himself and always tries to make himself look like an expert in any field, failing each time.

He never listens to advice and always blames others on his blunders and drags them with him. He is part of the comic relief that parallels the stress at the company. He often makes remarks that either offend or annoy people, even though his intentions may be to help someone feel better.

In the movie, Taro is still seen as trouble-maker by his co-workers and former co-workers. Although he has many ideas about the anime, all of them are rejected, even when producing SIVA. Taro believes that it's because his idea is "Very innovate". Although this, Taro is sensitive about the anime: During the preview of the final climax, Taro pointed out that the final climax has some problems(But the others think his complaint is impolite), which Kinoshita later admits it.

One month before Aoi Miyamori joins Musani, Tarou enters Musani. After a year, Musani release Exodus!. During producing, Tarou miss failed to finish the keyframes in time. Eventually, Aoi handles with it. However, he later faces a situation that Ryosuke Endo refuses to work due to his poor communication skill. Aoi finally settles this again. He later promoted to chief production assistant after Honda's departure. 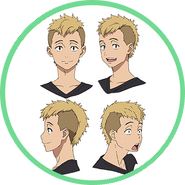 Facial design
Add a photo to this gallery

Retrieved from "https://shirobako.fandom.com/wiki/Tarou_Takanashi?oldid=8107"
Community content is available under CC-BY-SA unless otherwise noted.